Contact Now
Detailed Product Description
http://www.extractspowder.com
saraz82@foxmail.com
astaxanthin antioxidant,astaxanthin aging,astaxanthin anti inflammatory,astaxanthin algae,astaxanthin powder,astaxanthin cancer,astaxanthin in food,haematococcus pluvialis powder,astaxanthin 1-5% Cas.472-61-7
Astaxanthin is a keto-carotenoid. It belongs to a larger class of chemical compounds known as terpenes, which are built from five carbon precursors; isopentenyl diphosphate (or IPP) and dimethylallyl diphosphate (or DMAPP). Astaxanthin is classified as a xanthophyll (originally derived from a word meaning "yellow leaves" since yellow plant leaf pigments were the first recognized of the xanthophyll family of carotenoids), but currently employed to describe carotenoid compounds that have oxygen-containing moities, hydroxyl (-OH) or ketone (C=O), such as zeaxanthin and canthaxanthin. Indeed, astaxanthin is a metabolite of zeaxanthin and/or canthaxanthin, containing both hydroxyl and ketone functional groups. Like many carotenoids, astaxanthin is a colorful, lipid-soluble pigment. This colour is due to the extended chain of conjugated (alternating double and single) double bonds at the centre of the compound. This chain of conjugated double bonds is also responsible for the antioxidant function of astaxanthin (as well as other carotenoids) as it results in a region of decentralized electrons that can be donated to reduce a reactive oxidizing molecule.
Astaxanthin is found in microalgae, yeast, salmon, trout, krill, shrimp, crayfish, crustaceans, and the feathers of some birds. It provides the red color of salmon meat and the red color of cooked shellfish. Professor Basil Weedon's group was the first to prove the structure of astaxanthin by synthesis, in 1975. 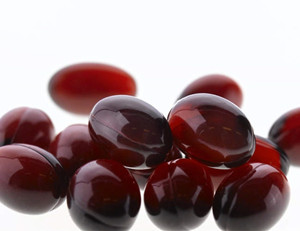